Ski touring is no longer just a trend – ski touring is the future away from alpine skiing. Austria’s first and largest ski touring park is situated on THE HIGHEST OF TIROL. The Pitztal Glacier has embraced ski touring and now boasts a total of three routes with varying degrees of difficulty. What makes the powered by DYNAFIT ski touring park special is the ascent in the secured ski area. The ascent tracks are laid out in such a way that there are no contact points with the downhill skiers. Overview boards provide information about the course of the respective route. There are further signposts/markings directly at the start, and set lines along the route guide the way to the summit destination. The ski touring season in the Pitztal runs from autumn to spring. Ski touring can no longer be considered just a trend, but is the ideal way to recharge your batteries in the heart of the Tyrolean mountains, especially at this time of year. 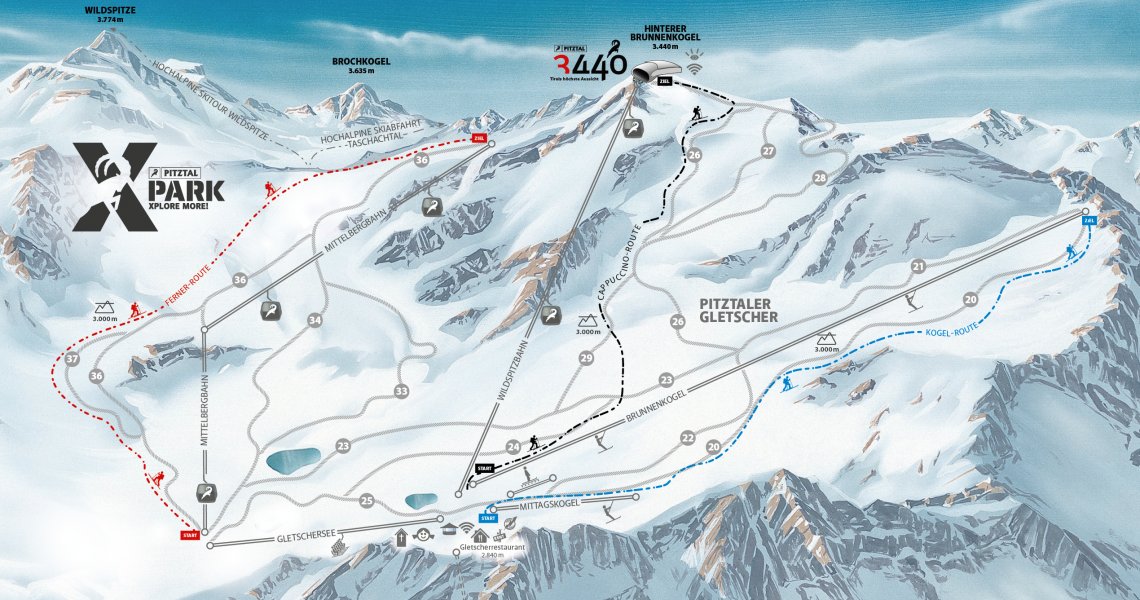 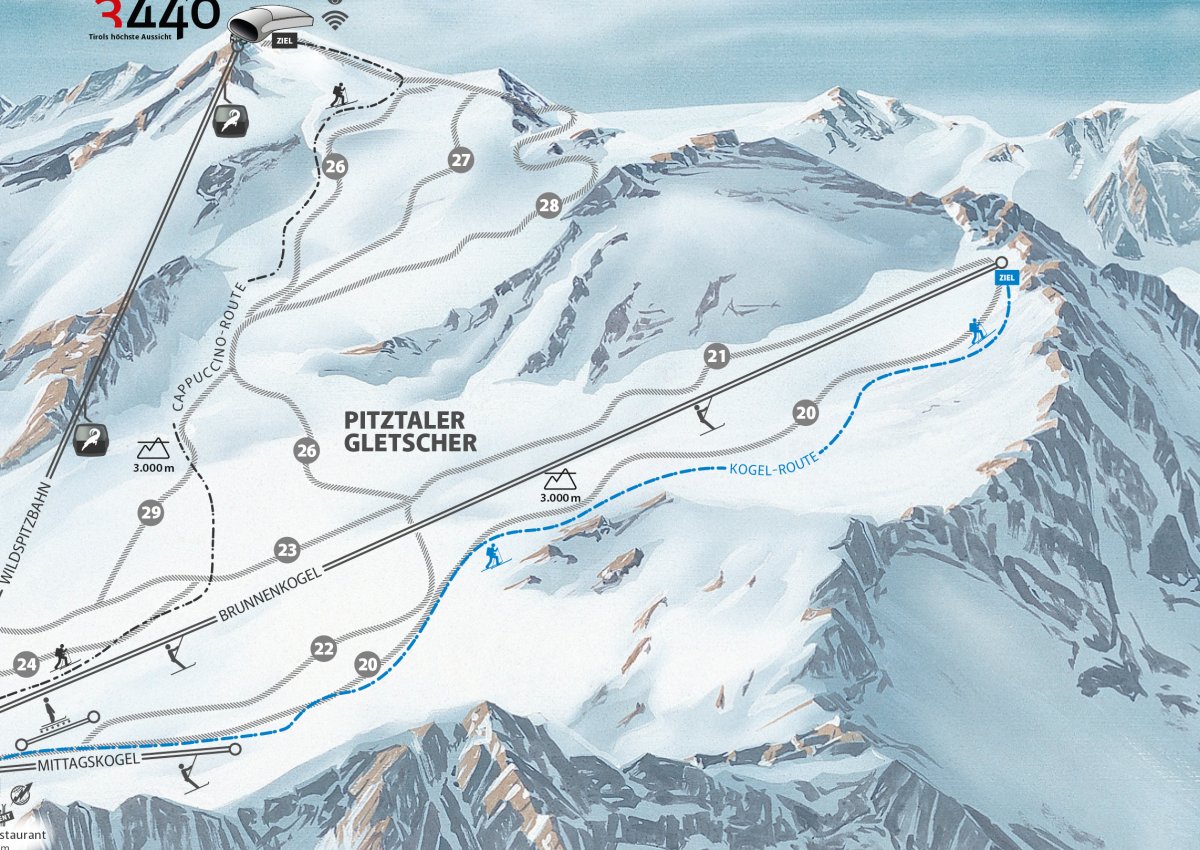 The ascent route runs along ski slope no. 20 on a moderately steep slope away from the valley station, always on the right edge of the slope (in the ascending direction). The ascent route leads off the ski slope after approx. 500 m on a specially created ascent track until you reach a small steep incline between the ski slope and a rocky mountain ridge. Following the steep incline, in a flat section, the route crosses over the slope to the left (in the ascending direction). The remaining ascent is made on a prepared track between the ski lift and the T-bar lift up to the mountain station of the lift. 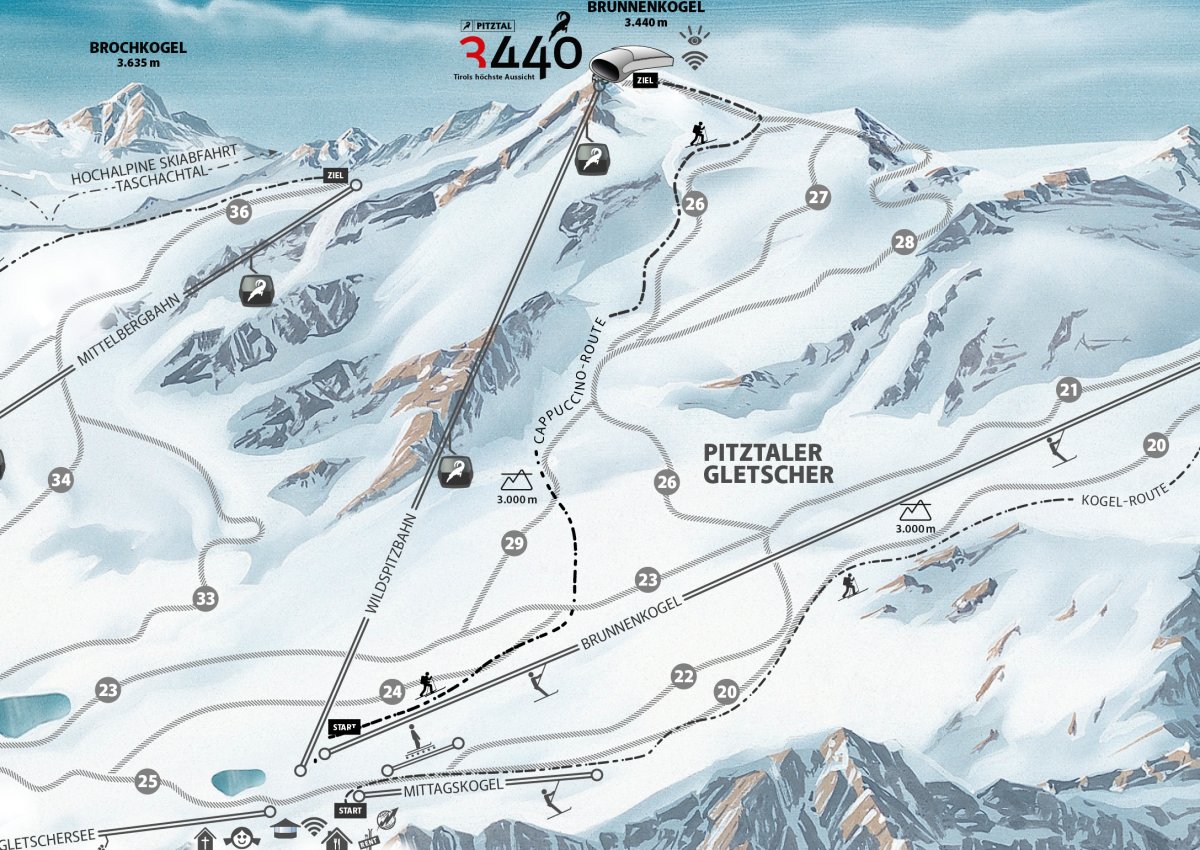 Flat ascent at the beginning to the left of the Brunnenkogel lift (in the ascending direction) on a specially created ascent track, after approx. 500 m turn left (in the ascending direction) and continue along ski slope no. 26. Continue from here along the left edge of the slope (in the ascending direction). Flat at the beginning, then slowly becoming steeper and a very steep ascent in the upper third. You reach a narrow ski path at the end of the steep slope. Continue along the right edge for approx. 200 m, then veer to the left and continue along the right edge of the slope to the Wildspitzbahn mountain station. Experience in ascents with touring equipment necessary. Only suitable for experienced ski tourers. There is a risk of crevasses away from the signposted ascent and the secured pistes. Ski tourers should not leave the signposted and secured areas under any circumstances.

Even though the Ferner Route piste ski tour is the longest, it is also a very rewarding one. It takes you along a red slope from 2684m up to 3278m. The panorama during the entire ascent is simply breathtaking, with views overlooking massive glacier formations as well as the impressive mountain backdrop.

The tour kicks off after a short descent to the Mittelbergbahn cable car. All the routes are marked directly at the valley station, there is space to set up your gear and then you can start off on the side of piste number 36. You pass a narrow section right at the beginning, where you have to be especially careful of possible oncoming winter sports athletes for about 50m. A further 500m up, the ascent track runs along piste 37. A glimpse to the left provides great views of the massive Mittelbergferner. After having covered the first third of the route along the medium-steep piste, the ascent route now veers off to the left and continues on a specially created ascent track. You can now also make out the summit of the Wildspitze in the distance, the second highest mountain in Austria. You are rewarded on the final ascent with a magnificent mountain panorama behind you, and at the top of the Mittelbergbahn mountain station, this view is your prize for 3.5km of ascent and 440 metres in altitude.

The pleasant gradient and fantastic panorama make this route highly recommended for beginners, advanced users and also for experts who want to enjoy the magnificent view.

Well informed at the X Park and on the slopes

Your break on THE HIGHEST OF TIROL